The German shepherd is one of the most easily recognized dog breeds in the world. From the iconic status of Rin Tin Tin on the silver screen to the breed’s prevalence as a canine soldier and law enforcer, the shepherd has consistently held a place canine history since its original debut in Germany in the early 20th century. 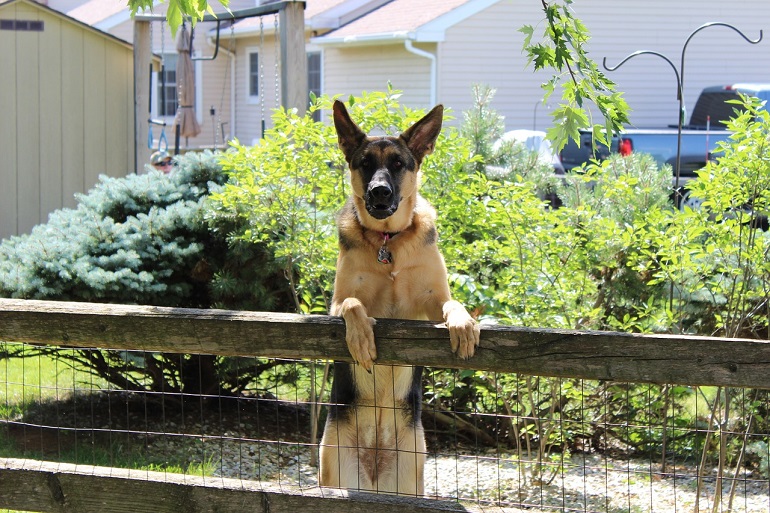 The breed was originally used to herd livestock, but as herding needs diminished over time, the breed’s fanciers found other roles in which to channel the shepherd’s many laudable strengths. Their intelligence, strength, and overall loyalty made them especially well-suited to protection and defense related roles.

Soon the shepherds (known also as Alsatians throughout parts of Europe) were being trained as canine soldiers, law enforcement officers, and protectors in general.

The breed can still be found on farms and ranches, herding and protecting livestock, although the majority of working shepherds have adapted their skills to serve in broader, less rurally based jobs.

Today, in addition to protection roles, shepherds are used as guide dogs, search and rescue dogs, and as narcotic and bomb detection dogs.

This versatility has undoubtedly played a significant role in the breed’s longstanding popularity, having consistently appeared on American Kennel Club’s top 10 most registered breeds over recent decades.

In 2015, the German shepherd was second only to the Labrador retriever on the AKC’s most popular breeds list (and has ranked no lower than 3rd on this list over the past decade).

Undoubtedly the shepherd owes this unwavering popularity to its well-deserved reputation of being one of dogdom’s most intelligent, strong, and unflinchingly loyal breeds.

There is no weight range specified, but the larger male dogs can reach up to 90 pounds, the average being closer to 75 pounds.

Coat colors accepted by the A.K.C. standard include sable, black, red, tan, and combinations thereof. Occasionally, colors such as liver, blue, and white will appear, but these are not colors recognized by the standard and will be disqualified in the conformation ring.

The disposition of the German shepherd is a mixed bag. They are extremely loyal, devoted companions and will protect their family at all costs, but these traits also make them aloof and wary of strangers and new situations.

Bred to protect, the improperly socialized, untrained shepherd can be a liability given their protective tendencies and their imposing size.

However, a well-balanced dog that has been raised with discipline and understanding can be a wonderful companion as the breed’s devotion is legendary. Many of those lucky enough to have owned a German shepherd will have no other breed.

Second only to their loyalty is the German shepherd’s intelligence, which has no doubt largely contributed to both their unwavering popularity and their prominent roles in various fields.

That being said, it sometimes takes a patient, disciplined owner to bring out the best in their dog as the breed sometimes has a stubborn streak which, when coupled with their sheer size and strength, can be daunting.

Owners should begin socialization and training at an early age and reinforce good behavior early on while staying consistent when discouraging unwanted behaviors.

While a relatively low maintenance breed when it comes to grooming, the German shepherd is a shedding breed and its double coat will require some attention to keep it comfortable and looking its best.

Puppies will shed their puppy coat around three or four months and adults will normally shed twice year depending on climate and their living conditions.

Daily brushing sessions, especially during shedding cycles, are recommended, thus it is important to get puppies accustomed to brushing early on.

As a large working breed, regular exercise is of upmost importance for German shepherd. If access to a large fenced-in yard is not possible, then long walks or trips to the dog park should be part of the daily routine.

Not only will regular exercise keep the dog in good condition, but it will burn off energy and keep the dog from finding more destructive ways to stay active.

German shepherds are made for endurance and thrive on activity, making them an ideal breed for active people and great hiking or jogging partners.

Like many popular breeds, the German shepherds is susceptible to some health concerns, probably the most common of which is hip dysplasia, common in many large breed dogs.

Hip dysplasia is a condition where the head of the femur bone is malformed in such a way that keeps it from fitting snugly in the hip joint. Over time the bone wears unevenly, causing degradation, inflammation, and pain.

While treatable, surgery can be very expensive and left untreated, the condition can cause severe pain as well as early onset of arthritis. In the most severe case, mobility can be so hampered by pain that the dog cannot walk at all.

Because of the potential severity of this condition, it is best to only buy dogs from reputable breeders who have their breeding stock certified by the Orthopedic Foundation for Animals (O.F.A.) to minimalize chances of their dog having the condition.

While the progress is different from dog to dog, degenerative myelopathy has no cure and eventually leads to total paralysis. While many breeds are affected by this disease, the German shepherd is among the most affected.

Similar to the human disease amyotrophic lateral sclerosis or ALS, degenerative myelopathy is incurable. That being said, upon diagnosis steps may be taken to slow the progression. Such steps include implementation of gene therapy, physical therapy, the addition of supplements, and a change of diet.

Testing for degenerative myelopathy is available through the OFA.

Another serious health concern for the German shepherd is bloat.

Bloat, a condition where the stomach twists thereby cutting off blood flow, is a common condition in large dogs. Bloat can strike suddenly and can be fatal in a matter of hours.

Some shepherd owners opt for a preventative surgery called “tacking” where the stomach is tacked to keep from twisting. Dogs that have already experienced bloat should definitely have this procedure as reoccurrence is probable without it.

Lastly, like many other large breeds, the German shepherd may suffer from heart issues.

Heart exams should be a part of every dog’s annual physical and owners should pay special attention to dogs that tire easily, pant extensively, or seem to breathe especially heavily after only moderate activity.

The German shepherd remains a popular breed among dog lovers largely due to the breed’s great versatility, legendary courage and devotion, and notable intelligence.

For the right owner, the German shepherd can be an unparalleled companion and an unwavering protector. B

eauty, brains, and brawn, the German shepherd is the total package and will most likely remain a favorite of dog lovers the world over for the foreseeable future.