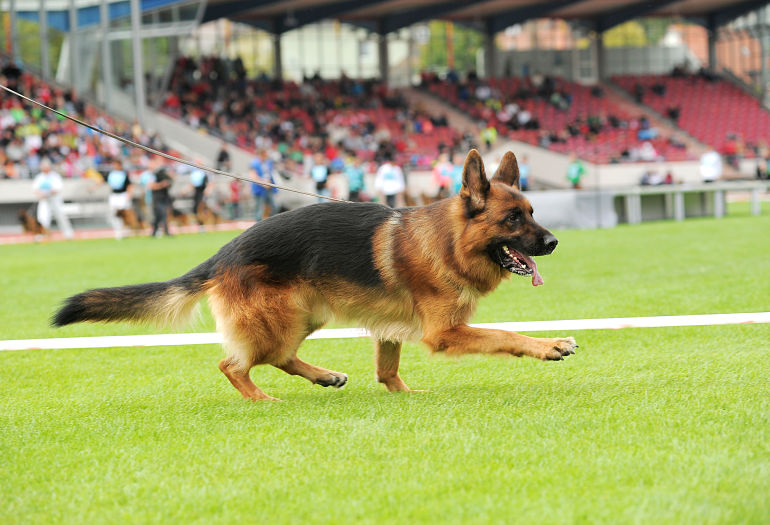 Heeling On Leash and Impartiality – 15 points

Starting from the basic heel position, the dog on leash should willingly and outgoingly follow the handler upon the voice command to heel (fuss). At the beginning of the exercise, the handler must proceed in a straight line 40 to 50 paces without stopping. A turnabout is performed and after 10 to 15 paces a running exercise and a slow exercise, each of at least 10 paces, are to be demonstrated. During a normal pace, at least one right, one left and one turnabout are to be performed. The turnabout has to be performed by the handler as a left turnabout. The dog should always heel close to the left knee of the handler with the shoulder blade next to the handler’s knee. The dog must not forge ahead, move to the side or lag to the rear.

The handler is only permitted to use the voice command when starting the exercise or when changing pace. When the handler comes to a stop, the dog should come to the sit position without being influenced by the handler. During the halt, the handler is not permitted to change the basic position and especially must not step sideways toward the dog. The leash must be held in the left hand and must hang loosely with a loop. The judge will direct the handler and dog to proceed through a group of at least four persons and the handler is required to stop at least once in the group. The group is expected to mingle about. A dog lagging behind, forging, moving sideways away, or hesitation by the handler in the turns is faulty.

When requested by the judge, the leash will be removed by the handler while still in motion. The handler now hangs the leash across the shoulder or places the leash in a pocket and proceeds with the freely heeling dog into the group and demonstrates at least one halt. After leaving the group the handler and dog briefly assume the basic position and then proceed into the off leash heeling pattern as performed on leash.

While the dog and handler are performing the off leash heeling exercise, at least two gun shots are to be fired (not while moving through the group) and the dog must remain indifferent to the gun noise. Should the dog demonstrate gun insecurity, the dog must be excused immediately from the trail. If the dog demonstrates a certain aggression toward the gun shot, this must be scores as conditionally faulty as long as the dog remains under control of the handler. The full score can only be awarded to the dog who demonstrated gun indifference.

Special emphasis must be placed upon gun indifference. The shots must be fired from a distance of fifteen paces with two shots fired with a ten second interval. Should the dog run away from the gun shot, the dog is to be excused from further participation. Should the judge detect gun insecurity in a dog it is permissible to test the dog with additional gun shots. The gun shot impartiality test can only be executed during the heeling off leash and long down under distraction.

From the basic heeling position the handler and free heeling dog proceed in a straight line. After at least 10 paces, upon voice command, the dog should come quickly to the sit position. While the handler does not interrupt his/her pace nor turn about. After 30 paces the handler stops and turns around to face the dog. When requested by the judge the handler will return to the dog and assume the basic heeling position on the right side of the dog. Should the dog lay down or remain standing instead or performing the sit exercise, up to five points will be deducted.

Down With Recall – 10 points

Upon voice command from the basic position, the handler and free heeling dog proceed in a straight line. After at least 10 paces, upon voice command, the dog must lay down quickly. Without additionally influencing the dog and without turning around, the handler will proceed another 30 paces in a straight line and turn around to face the dog and remain motionless. When requested by the judge, the handler recalls the dog. The dog should come to the handler with a spirited and swift motion and sit close in front. Upon the command “heel”. the dog should quickly come to the sit position next to the handler. Should a dog stand stay or sit during the exercise but returns on the recall with out fault, 5 points will be deducted.

The dog sitting freely next to the handler should, when given the voice command, quickly move toward the object which has been tossed approximately 8 paces away. The dog must immediately and quickly pick up and retrieve the object to the handler. The dog must sit close in front of the handler and must hold the object until the handler, after a brief pause, removes the object with the command to let go. After the command to heel, the dog should quickly come to the heel position. In place of an object belonging to the handler, a dumbbell can be used; however, balls, toys, etc. are not considered personal articles. The handler must remain in the basic position until the dog has assumed the heel position.

Retrieving an Article Belonging to the Handler Over a 1 Meter High and 1.5 Meter Wide Brush Hurdle – 15 points

The handler assumes a position at an acceptable distance in front of the hurdle while the dog sits freely next to the handler. A dumbbell can be substituted for an article belonging to the handler. Upon voice command the dog must clear the hurdle without touching it, pick up the object and sit closely in front of the handler after the return jump has been cleared. The object must be held by the dog until the handler removes it with the command to let go. Upon command, the dog must quickly come to the heel position. The command to bring must be given before the dog has reached the object.

Prior to the start of the obedience exercise of another dog, the handler commands the dog into the down position at a spot designated by the judge. The handler moves approximately 40 paces away within sight of the dog without leaving the leash or another object with the dog. The handler remains quietly with his back to the dog. The dog must remain in the down position without additional influence from the handler until the other exhibiting dog has concluded exercises 1 through 6. After completion of exercise 6 and upon Direction from the judge, the dog in the down position will be picked up. The exercise will finish like “Go Ahead and Down” exercise.