German Shepherds are beautiful, strong dogs that have been used in a variety of working canine positions over the decades. However, this intelligent breed is also susceptible to several health problems involving the bones and joints that most other dogs are more resistant to. Here, we will examine what is most likely to affect a German Shepherd. 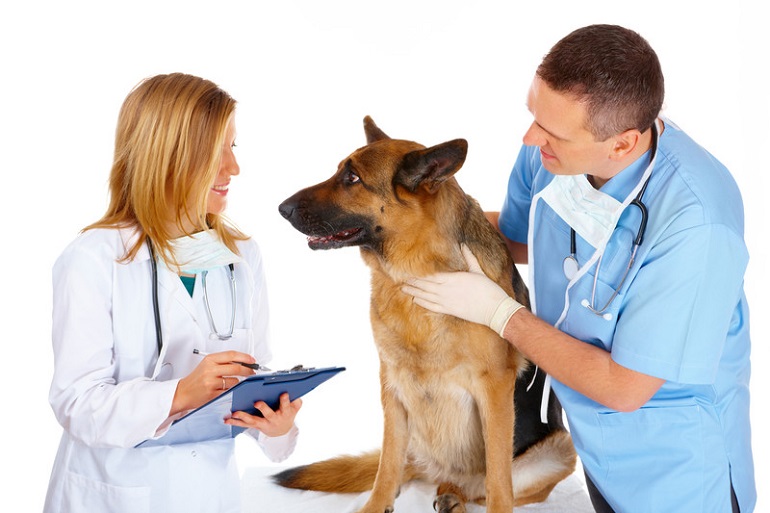 German Shepherd puppies tend to have a higher risk than most of coming down with panosteitis, a condition where the long leg bones grow too quickly and can cause severe pain. It is most common in young pups, under 12 months of age, but can affect dogs up to the age of two years, after which it is extremely rare. Panosteitis, or pano, is not curable, but puppies usually outgrow it within a month or two.

You will notice that your puppy seems to be in pain when suffering from pano. He may not feel up to playing and running like normal and may limp. German Shepherd puppies can be fine one day and suffer from these “growing pains” the next. Panosteitis comes and goes, but it is usually permanently gone by 18 months, with rare cases lasting up to 2 years of age.

Perhaps one of the best known joint problems in dogs, especially German Shepherds, is hip dysplasia. This health issue occurs when the femur doesn’t fit into the hip socket correctly. It can also occur in the elbow and causes quite a bit of pain. Dysplasia is genetic and efforts are being made to eliminate this disorder from the breeding gene pool. It is an ongoing process, though and the best we can do for now is to X-ray and scan dogs that are at risk before breeding them.

The third type of joint problem that we find more often in German Shepherds than other breeds is osteochrondrosis dissecans or OCD. This is when the bone actually begins to crumble beneath the cartilage, particularly in joints such as the shoulder, elbow and ankle. OCD commonly shows up between 6-9 months of age and is more common in puppies whose parents suffered from the condition.

OCD can drastically affect a dog’s performance. While a pup may be able to frolic like normal for a short while, he will end up limping when he slows down and notices the pain. This condition also puts the dog at risk for further joint injury and cartilage damage.

Screening German Shepherd puppies for OCD and dysplasia is a good way to ensure that your puppy will be healthy, however there is no guarantee. Keep an eye out for suspicious symptoms and know the medical history of the puppy’s parents to avoid many future problems.