As a proud new owner of a German Shepherd puppy, it’s your responsibility to train it to become an obedient and well-adjusted dog. By far the best way to train any dog is with positive reinforcement training. This means rewarding your dog when they show the behavior you want from them.

It does not mean shouting, scolding or even physically striking your dog. Using out-dated, not to mention unkind, training methods such as these will only teach your dog to become afraid of you. As a dog owner, you want to build a relationship with your dog; one of mutual trust and respect (albeit where your dog views you as the pack leader). And you’ll never be able to do this if your dog is scared of you. 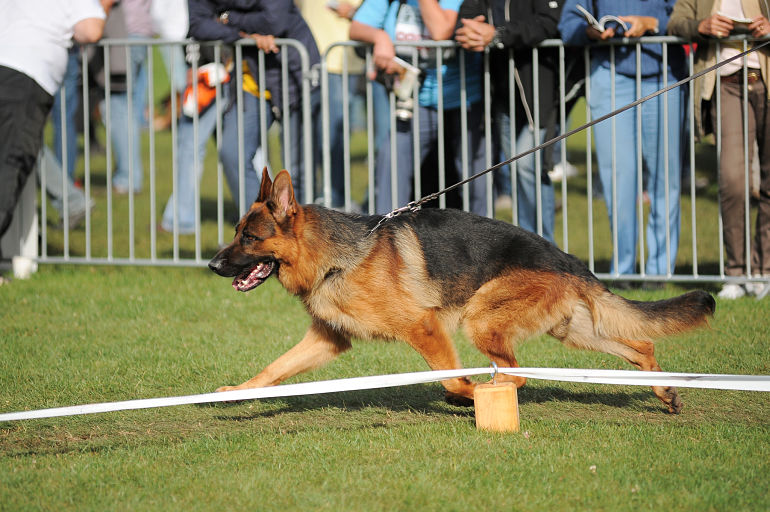 Stopping Your Puppy Nipping And Biting

Every young puppy will have a tendency to nip at first. They do this because when they do so they get attention from you. They’ll also do it sometimes because they’re teething.

The best way to stop a puppy from nipping is to mimic the way their mother would. If you ever watch puppies playing with their mum, you’ll see they occasionally get carried away and will bite or nip. The mother will then let out a noise, stop playing, and let the puppy know this isn’t something they should be doing.

So if your puppy nips you when you’re playing with it, let out an “Ackk!” or “Ouch!” noise, and stop playing with it for a few minutes. They’ll soon learn that biting or nipping you means the fun stops and so they’ll change their behavior and stop biting.

Stopping Your Puppy From Chewing

Puppies have a natural tendency to chew things. There are a number of reasons for this. For example, they may chew when they’re teething, or just through sheer boredom or anxiety when left alone.

It’s important to train your puppy to know exactly what they can and cannot chew. The best thing to do is to make sure your puppy has some proper dog chew toys to play with and chew and bite on. If they start chewing something they shouldn’t, correct them (without shouting) and give them their chew toy instead. When they take it and start chewing on it, give them plenty of praise and petting, telling them how good they are.

It’s also important that you don’t give your puppy old shoes or clothes to play with and chew on. Your puppy won’t know the difference between the old ones and the new ones and it will just be confusing for them when you tell them off for chewing on one shoe and not the other. So stick to proper dog chew toys.

One other thing to bear in mind is how strong and destructive your puppy can be. So it’s important you make sure any chew toys you do give to them are tough enough and they won’t be able to destroy them and possibly hurt themselves on them.